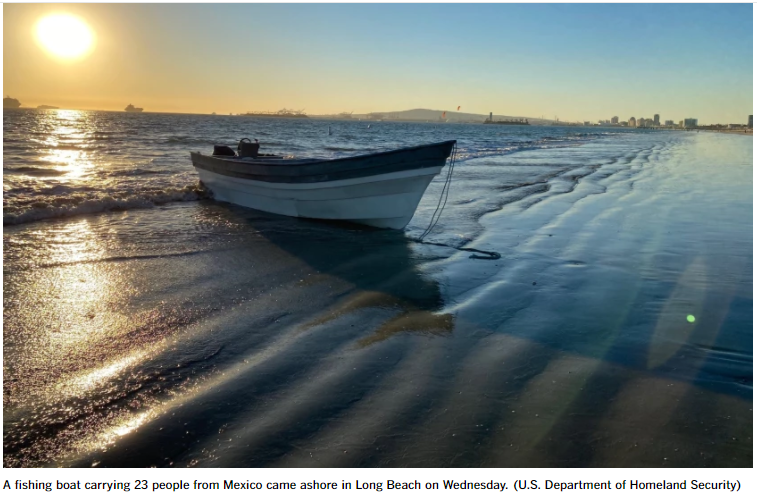 Smuggling events are dangerous for migrants, as they risk capsizing, hypothermia, or crashing alongshore. Migrants may pay thousands of dollars to try and make the maritime journey to the U.S and sometimes they are sent back home.

The effects of the COVID-19 pandemic are felt on a global scale and could possibly drive migrants from their homes to the U.S.

According to the center for immigration studies’ website, Los Angeles County is a sanctuary county that  “will not honor ICE detainer without a court order or an arrest warrant.”

panga (fishing) boat, where they were all arrested by authorities.

What happens to these migrants after they are arrested, given the sanctuary status of Los Angeles County?

According to an LA Times article, first-time migrants from the boat might be deported back to their migrating countries, while others will be assessed individually.

Long Beach voted to help protect immigrants in 2018 with the establishment of the Values Act.

It also establishes that no city resources are to be used to create registries based on religious affiliation, immigration status, or any other protected class such as gender, sexual orientation, race, etc.

It takes an aggressive approach to advocate at the federal and state level for pro-immigrant policies.

While the Values Act and sanctuary county status may aim to help immigrants that come to Long Beach, the actions of local DHS and CBP offices may not reflect these values.

Long Beach Utilities to set up relief program for

3 People Shot at Silverado Park just before 2pm in

Tour of the @portoflongbeach ! Now you can tour

City Issues Safety Tips for Residents Due to Sever

City of Long Beach to Welcome Visitors Back Onboar

What can parents do about Respiratory Syncytial Vi

The bakery @simones.donuts on the corner of E Stea

The City of Long Beach today celebrated the ground

Whether it's a gift or doing it yourself, these ar

This past summer, the City of Long Beach completed